The call for the 5th edition of the Festival is online

of international cinema 2020 “A Rare Look”

The call to participate in the 5th edition of “A rare look” – the Rare Disease International Film Festival, the international film festival on the topic of rare diseases 2020, is online on the site of “A rare look” (www.unosguardoraro.org). November 30, 2019 is the deadline by which it will be possible to upload the works on the FilmFreeway platform (https://bit.ly/2ltPIMv).

Born to tell what it means to live with a rare disease or with different abilities and to stimulate, through cinematographic narration, a reflection on how it is possible to tackle these themes with innovative and highly emotional communication registers, the Festival represents the challenge – collection by young filmmakers from all over the world, by rare patients, by patient associations and by those who live with them – to tell this reality from a different point of view, with “A Rare Look”. The appointment with the Festival is in Rome from 9 to 15 March 2020, in various locations.

One of the most important purposes of Uno Sguardo Raro is, as ever, to involve more and more young people, university students and cinema, art and communication school’s students, in order to involve the new generations in the subject of rare diseases, hoping that they will be able to share it with the public through their work, but also to stimulate a greater social inclusion for this community.

We will select the finest video works focusing on rare diseases, awareness-raising videos and the importance of social inclusion, as well as works that address disability, empathy, resilience, or the ability to overcome one’s own limitations, in order to celebrate the qualities that people with limitations of any kind put in place to live their lives to the full.  A Rare Look wants to create a meeting point of solidarity between the world of cinema and this reality full of intense and exciting narrative cues with the hope of increasing public awareness of these issues and the impact that rare diseases and disabilities have on the daily life of families.

The artworks will be judged and awarded by a Jury of Quality composed of cinema, communication, scientific and rare community professionals. These will be joined by a Special Mention Popular Jury, which will be awarded according to the votes of the public.

This year, the Communication Award created with FERPI officially enters the competition categories and it is accessible either to Patient Associations or to Pharmaceutical Companies, that can present awareness-raising or behavioural changing focused videos.

The Short/Spot for Healthcare Communication and related social campaign in collaboration with PA SOCIAL will also be part of the competing categories and will be accessible to Hospitals, ASLs and the Patients’ Associations working in hospitals, which can participate via video service products aimed at both the public and internal staff. This is an absolute first for our Festival.

The HEYOKA Award has been confirmed; it is an out-of-competition award, resulting from the meeting between Uno Sguardo Raro and the Heyoka Empath Community, a project of Ability Channel, a historical online magazine dedicated to “positive” disability. Heyoka Empath stimulates people to “Break the chains, go beyond your limits, be an example”. Among all the works received by Uno Sguardo Raro, the jury of the HEYOKA Award will select works that address the topic of empathy and inclusion and have them voted by their community.

A Rare Look (show.kirweb.it/2) is the result of the meeting between Claudia Crisafio, author and actress, and Serena Bartezzati, a rare disease sufferer and professional of communication, who embraced a belief that belonged to Ingmar Bergam: “There is no art form like cinema to strike the conscience, shake the emotions and reach the secret rooms of the soul”. The first two editions, held in 2016 and 2017, presented a review of commercials, short films and docu-films through the experience of the protagonists: the directors, the interpreters, the community of rare diseases patients and their representatives. These events gave birth to the Festival in 2018, and the high involvement of works and audience confirmed the success of the idea.

A disease that affects less than 5 out of 10,000 people is called RARE. Very rare diseases affect less than one in a million. The diseases are rare, but the patients aren’t. In fact, according to the Orphanet network, there are over one and a half million patients in Italy and EURORDIS, the network of European alliances of MR, estimates the number of patients in Europe at 30 million. To understand the extent of the problem for the new generations, according to the MonitoRare report of the UNIAMO Federation, 1 patient out of 5 is less than 18 years old. We are talking about a community that needs its voice to be heard, just as it is important to spread the experiences of different countries and cultures in order to see things with other perspectives and to develop a new sensibility; this is one of the main purposes of the Festival.

The organizational body of the Festival is “Nove Produzioni” association, a de facto, non-party and non-political, non-profit association, founded by President Claudia Crisafio in 2017 with the support of members from the world of cinema and the community of rare diseases patients, with the aim of holding the film festival entitled Uno Sguardo Raro. The social purposes are the diffusion of culture as a tool for social integration and for raising awareness on issues of public interest, especially in the context of rare diseases, and, above all, to promote actions for the society through innovative visual communication, based on ethical and inclusion principles. 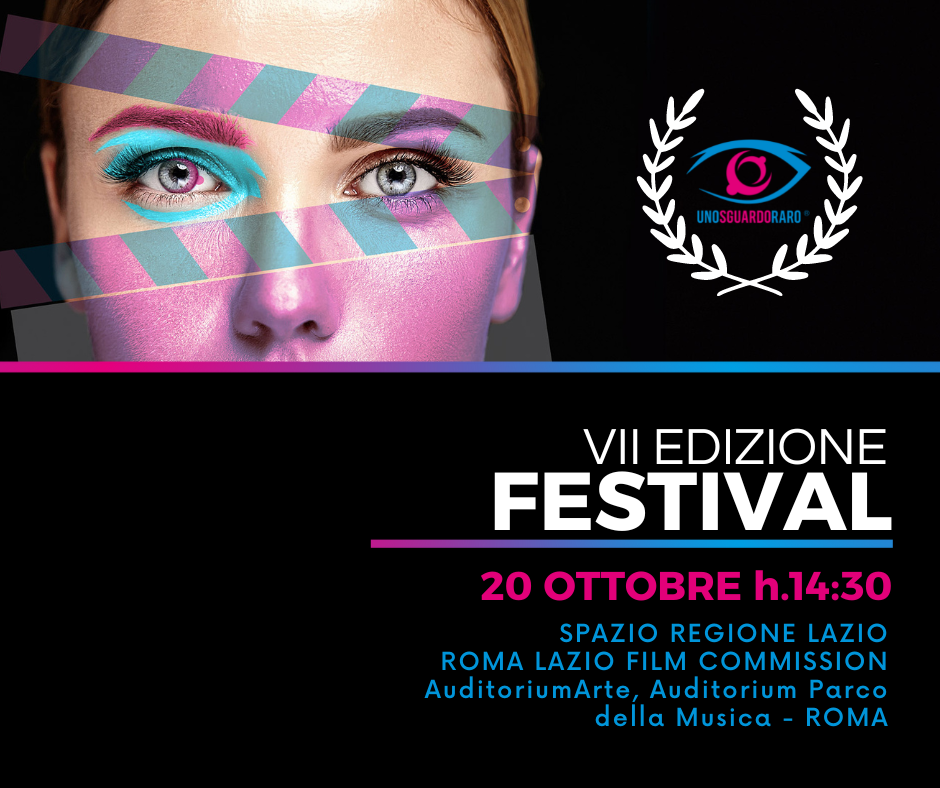